“The Secret of Spellshadow Manor (Secret of Spellshadow Manor, vol. 1),” by Bella Forrest. Summary: What if you found yourself recruited to an institute of magic, only to discover you really couldn’t do magic? What if your enrollment there was all one big, terrible mistake? If you were at Spellshadow, you’d keep it a secret. A deep, dark, deadly secret…Because Spellshadow’s elusive Head is hiding a secret of his own, one that our hero Alex soon realizes he and and his friend Natalie must uncover at all costs if either of them wishes to leave the Manor alive – and before it’s too late. Mystery, suspense, and plenty of twists and turns; an unforgettable experience awaits you in Spellshadow Manor…

Endgame series, vols. 1 (“The Calling),  2 (“Sky Key“), and 3 (“Rules of the Game“), by James Frey. Summary of series: Twelve thousand years ago, they came. They descended from the sky amid smoke and fire, and created humanity and gave us rules to live by. They needed gold and they built our earliest civilizations to mine it for them. When they had what they needed, they left. But before they left, they told us someday they would come back, and when they did, a game would be played. A game that would determine our future.

“The End (Enemy series vol. 7),” by Charlie Higson. Summary: Racing to London to warn the kids of an impending invasion by Saint George’s army, Shadowman struggles to convince Nicola, David, Matt, and the others that their forces must work together in order to survive.

“Generation One (Lorien Legacies Reborn, vol. 1),” by Pittacus Lore. Summary: It has been one year since the breathtaking events of United as One–and our world will never be the same.The invasion of Earth was thwarted by our alien allies known as the Garde. But in order to do so, they unleashed their Loric energy and it spread throughout the globe. Now human teenagers have begun to develop incredible abilities–Legacies of their own. As the world tries to figure out how best to deal with the emergence of these powerful and potentially dangerous individuals, the Garde have come up with their own solution. They’ve created an academy where they can train this new generation to control their powers and hopefully one day help mankind…but that day may come sooner than any of them ever imagined. Perfect for fans of Rick Yancey’s The 5th Wave and Marvel’s X-Men, this epic new series follows a diverse cast of teens as they struggle to hone their powers and decide what, if anything, they should do with them. While set in the world of the #1 New York Times bestselling I Am Number Four series, those familiar with the original books and newcomers alike will devour this fast-paced, action-packed adventure.

“A Court of Wings and Ruin (Court of Throne and Roses, vol. 3),” by Sarah Maas. Summary: Feyre has returned to the Spring Court, determined to gather information on Tamlin’s maneuverings and the invading king threatening to bring Prythian to its knees. But to do so she must play a deadly game of deceit-and one slip may spell doom not only for Feyre, but for her world as well. As war bears down upon them all, Feyre must decide who to trust amongst the dazzling and lethal High Lords-and hunt for allies in unexpected places. In this thrilling third book in the #1 New York Times and USA Today bestselling series from Sarah J. Maas, the earth will be painted red as mighty armies grapple for power over the one thing that could destroy them all.

“The Thousandth Floor (Thousandth Floor, vol. 1),” by Katharine McGee. Summary: A hundred years in the future, New York is a city of innovation and dreams. But people never change: everyone here wants something…and everyone has something to lose. Leda Cole’s flawless exterior belies a secret addiction—to a drug she never should have tried and a boy she never should have touched.

“Middle School Mayhem (The Misadventures of Max Crumbly, vol. 2),” by Rachel Renee Russell. Summary: When we last left our hero, Max Crumbly, he had crash-landed on top of a Mighty Meat Monster pizza after taking a late night tumble through the vents at South Ridge Middle School–and he was completely surrounded by three ruthless criminals! Will Max be shredded to bits like mozzarella cheese on the hard and crunchy pizza crust of doom? Can his friend and sidekick, computer whiz Erin, help get him out of this sticky situation alive?

Queen’s Thief series, vols. 1 (“The King of Attolia“) and 2 (“The Queen of Attolia“), by Megan Whalen Turner. Summary of series: When Eugenides, the Thief of Eddis, stole Hamiathes’s Gift, the Queen of Attolia lost more than a mythical relic. She lost face. Everyone knew that Eugenides had outwitted and escaped her. To restore her reputation and reassert her power, the Queen of Attolia will go to any length and accept any help that is offered…she will risk her country to execute the perfect revenge.

The Teens’ Top Ten picks are here! The Teens’ Top Ten is a “teen choice” list, where teens nominate and choose their favorite books of the previous year, so they’re YA books chosen by teens for teens! Nominators are members of teen book groups in fifteen school and public libraries around the country. You can learn more about the award here.

Check on any of the images below to access the title in our catalog. Books are listed alphabetically by author. Click here for a list containing a short synopsis of each book.

Scythe, by Neal Shusterman. “Scythe” is one of four 2017 Printz Honor Books, which are awarded yearly to books geared to young adults that exemplify “literary excellence in young adult literature.”

Strange the Dreamer, by Laini Taylor. The best-selling author of the “Daughter of Smoke & Bone” trilogy presents the story of a guilt-ridden hero, a dreamer librarian and a girl with dangerous powers who all combat monsters and treachery in the aftermath of a war between gods and men. Read the Kirkus review here.

The 2017 TTT nominees have been announced! The TTT are announced every year on the Thursday of National Library Week (April 9-15). Check out the video below featuring Amandla Stenberg and Nick Robinson, stars of “Everything Everything,” the new movie hitting theaters later this year and based on the best-selling YA novel by Nicola Yoon.

A total of 26 books were chosen by members of teen book groups from fifteen schools and public libraries in the U.S. Click on “2017 TTT Nominees” for a list of titles.

The Rodgers Memorial Library carries many of these titles. Click on the title to access the book in our catalog:

Click on the book cover image or the title below to access the book record in our catalog!

School of Laughs (I Funny, vol. 5), Dog’s Best Friend and Escape to Australia (Middle School, vols.8 and 9), all by James Patterson.

The End of Oz and Yellow Brick War (Dorothy Must Die, vols. 3 and 4), by Danielle Page.

Summary: It’s been happening since Min was eight. Every two years, on her birthday, a strange man finds her and murders her in cold blood. But hours later, she wakes up in a clearing just outside her tiny Idaho hometown—alone, unhurt, and with all evidence of the horrifying crime erased.Across the valley, Noah just wants to be like everyone else. But he’s not. Nightmares of murder and death plague him, though he does his best to hide the signs. But when the world around him begins to spiral toward panic and destruction, Noah discovers that people have been lying to him his whole life. Everything changes in an eye blink.

For the planet has a bigger problem. The Anvil, an enormous asteroid threatening all life on Earth, leaves little room for two troubled teens. Yet on her sixteenth birthday, as she cowers in her bedroom, hoping not to die for the fifth time, Min has had enough. She vows to discover what is happening in Fire Lake and uncovers a lifetime of lies: a vast conspiracy involving the sixty-four students of her sophomore class, one that may be even more sinister than the murders.

★ “Min is not your average 16-year-old. Every two years on her birthday, she’s murdered. And every two years she comes back, completely unharmed. She’s tried to escape the inevitable but knows it’s only a matter of time before the man in black returns for her. Now things are getting worse, with an asteroid headed toward Earth. . . [j]ust when she’s found that classmate Noah is having the same strange experiences she’s tried to keep hidden. . . . Hooked readers will be tapping their fingers waiting for the sequel.”—Kirkus Reviews, starred review

★ “There are many overworked adjectives for action books: page-turner, fast-paced, intense. For this book, multiply all of them. Reichs truly keeps readers guessing throughout, with twists on early every page.”—Booklist, starred review

On August 9, 1945, six-year-old Sachiko, who lived in Nagasaki, Japan, was playing outdoors with four other children. Moments later, those children were all dead. An atomic bomb had exploded half a mile away, destroying everything in its wake. In “Sachiko: A Nagasaki Bomb Survivor’s Story,” author Caren Stelson shares the true story – using pictures and text – of a young girl who survived the atomic bomb, and chronicles her long journey to health and peace.

Also in: The first volume in Amy S. Foster’s The Rift Uprising trilogy is a fast-paced action-adventure, where a young soldier comes to question the monsters she’s trained to fight against, and the monsters she fights for.

Finally, in “Burn Baby Burn” by Meg Medina, 17-year-old Nora Lopez lives through a freezing cold winter and a searing hot summer in 1977, when a serial murderer Son of Sam is terrorizing her hometown New York City, and the city seems on the verge to explode.

Click on the image above or the title below to access the record in our catalog. Books are listed alphabetically by author.

Dystopia! It’s all about the dystopia.

A second batch of arrivals includes two series: the critically-reviewed Razorland Trilogy by New York Times best-selling author Ann Aguirre has just been acquired, along with Kass Morgan’s classic dystopian trilogy 100. Click on the titles or on an individual image to access the records in our catalog. 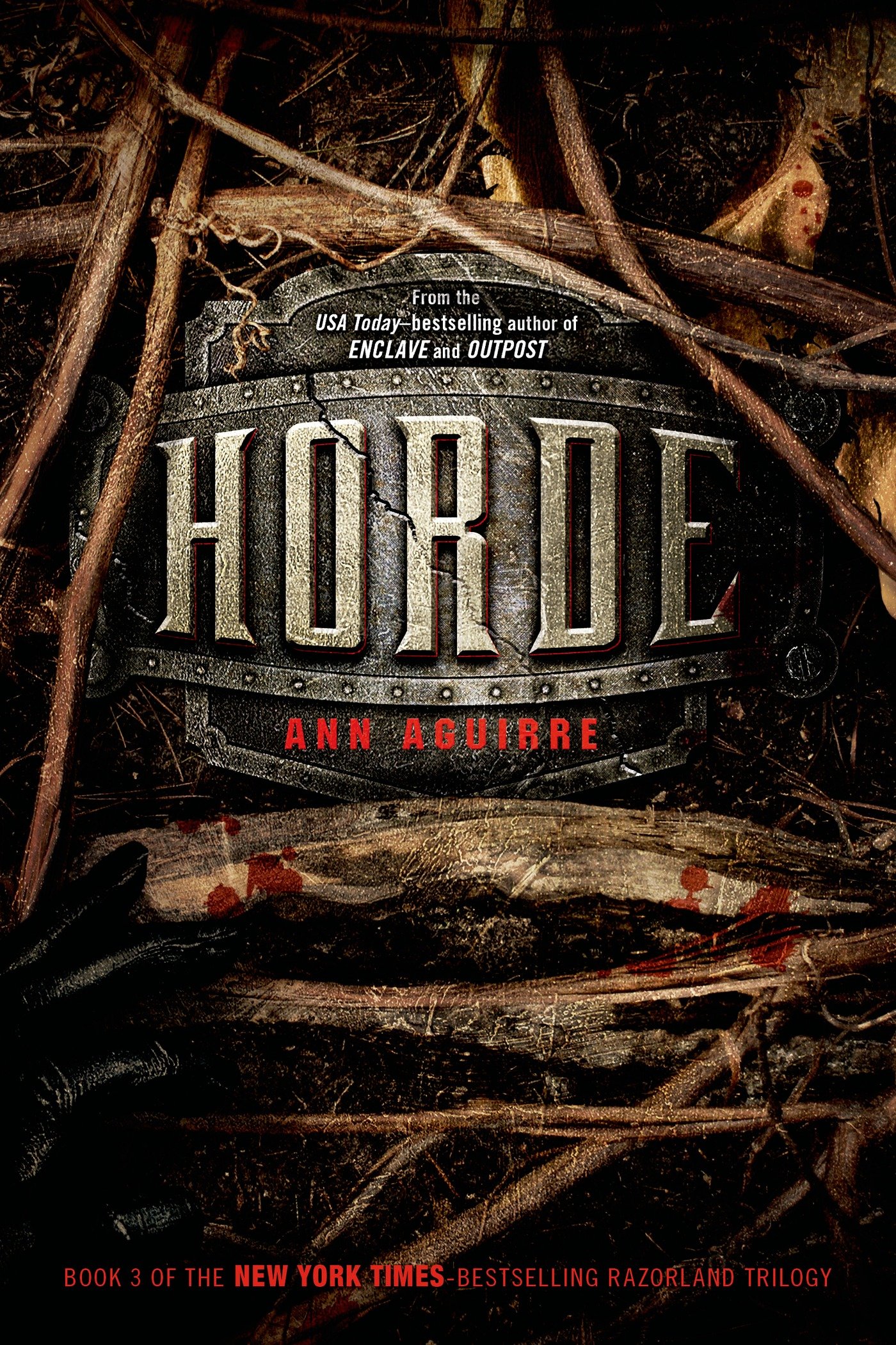 Take a look below at our newest series and non-fiction titles. Click on the title or book cover to access the record in our catalog, or read a review or summary (if available). Books are listed alphabetically by author’s last name.